Another long day at Denver Comic Con, but a good one.

Entry was pretty smooth. I don’t know what changes they made, but they; seem to gotten it ironed out after yesterday.

I also picked up a few t-shirts, even though I probably shouldn’t have.

Got my photo op with Lena Headey. She is teeny, tiny, and smiled the whole time, and she was still intimidating as hell. Crazy!

And while I was waiting in line, I saw somebody’s line that was way long: 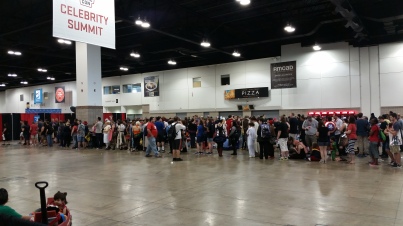 Glad I wasn’t waiting in that line.

Then I got my photo op with Katee Sackhoff.

She’s awesome. I hope the rumors about a Judge Dredd series involving her are true. That would be completely kick-ass.

I didn’t take a bunch of photos of cosplayers, but I did grab this one, as it was nice to see the classic version of a character I saw dozens of the modern, film version of: 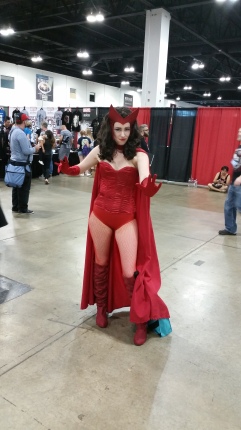 Anyway, now, it’s time to get most of my packing done so I can check out of the hotel in the morning, hit the last day of the con (and get Clark Gregg’s photo) before taking the train back to the airport to fly home tomorrow night.

Overall, it’s been a good con: one I wouldn’t mind visiting again in the future.