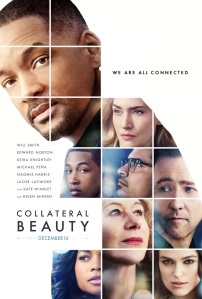 Retreating from life after a tragedy, a man questions the universe by writing to Love, Time and Death. Receiving unexpected answers, he begins to see how these things interlock and how even loss can reveal moments of meaning and beauty.

Well, it’s December, and time for studios to push out their traditionally weepy, often maudlin, Oscar-bait movies designed to pluck at voters’ heartstrings and maybe garner a Best Supporting Actor or Actress nod.

This year, that effort has brought us Collateral Beauty.

The premise, as hinted at in the IMDB description above, is how the act of railing against the Universe in the face of tragedy can bring about unexpected results.

Howard (Will Smith) loses his daughter, and spends three years in a downward spiral, losing his marriage and slowly killing the until-now successful advertising agency he started

Howard’s business partners (Edward Norton, Kate Winslet, and Michael Pena), concerned for their friend and the (quickly collapsing) state of the company they all work at with/for Howard, hire a private detective to find something they can use to have Howard declared just incompetent enough to negate his controlling interest vote to allow a buy-out that will save the company and its jobs.

The detective can only find that Howard has predictably withdrawn into an anti-social shell, rarely leaving his apartment and that he writes letters to Love, Time, and Death: the “three Abstracts” as he calls them.

Obviously, Howard never expects a response, so imagine his surprise when he is greeted one day by Death (Helen Mirren), then Time (Jacob Latimore), and finally Love (Kiera Knightley).

Each of the Abstracts tries to answers the questions and accusations Howard has flung at them. In Love’s case, she tries to convince him that his simple note to her, “Goodbye,” is not acceptable or even possible. Howard slowly realizes, however reluctantly, that some of their arguments may be valid, even though they may not be what he wants to hear.

But we, the audience, know the truth Howard doesn’t: that Howard’s partners have hired three actors to portray the Abstracts in hopes of gathering evidence to bolster their efforts to save the company. Sadly, this motivation seems less noble than what they could have been doing, which is using the Abstracts to help bring Howard back to reality, to help him heal. Once confronted with video evidence (doctored to remove the Abstracts) of his unbalanced behavior, Howard confesses his limitations, forgives his friends for using his situation against him for the good of the company, and finally acknowledges, legally, the death of this daughter.

Each of the Abstracts is paired up with one of Howard’s partners, and each of them learns something about themselves while helping tailor the performances for Howard. While there are some good performances here, Helen Mirren especially, most notably when she’s dealing with Michael Pena’s character, the movie winds up simply as the sum of its parts, never elevating itself above the material.

What might have been intended as a series of poignant, emotional vignettes plays more as a somewhat predictable string of melodramatic, overwrought, Dr. Phil sound-bites and platitudes.

The ending is nicely unexpected, though, unless you have been paying attention along the way for the breadcrumbs.

Collateral Beauty should be much more than it is, but even some good performances by a great cast can’t raise it high enough.