Projected release date for the Darkscapes Anthology is January 31st. I will post a link for pre-orders when they are available.

A list of the stories (with brief blurbs) is below…

Curiosity Quills Press explores yearning, regret, and fear with the
Darkscapes Anthology — a spellbinding collection of dark fantasy,
sci-fi, cyberpunk, horror, and detective fiction. Delve into worlds of
terrible family secrets, unexpected doppelgängers, a home invasion on
an alien planet, androids and assassins, places and people who aren’t
as stable as they seem, frustrated musicians going to desperate
lengths — and more. 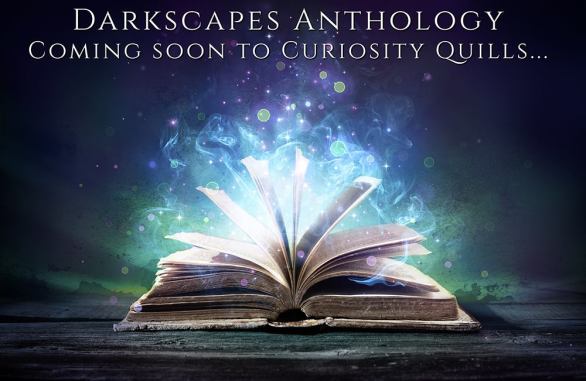 Benjamin Sperduto – LENA’S SONG
In the near future, two frustrated musicians and creative partners get in on the ground floor of neural firestreaming — but an old guitar creates an unexpected effect

J.R. Rain – SKELETON JIM
A skeleton detective who leads a double life as an Internet sensation takes a beautiful woman on as a client — and gets more than he bargained for

S.E. Bennet – OF LUSHER AND SLEEP
In this modern, alternative imagining of Romeo and Juliet, a veteran from an old-money family returns to London for his mother’s funeral and is confronted with a toxic history of two warring families — and a lost love

Piers Anthony – IN THE SHADOW OF THE SONG
An American’s car is rear-ended by a lost Muslim traveler with diplomatic immunity; the traveler sings in the American’s place at his daughter’s school recital — with surprising results

J.P. Sloan – FAIL HOUSE
On the night the Chinese land the first mission to Mars, unemployed roommates in a crumbling American city navigate through riots to their government-subsidized housing — but is it the safe place they thought it would be?

Tegan Wren – BOOTHEEL
An aged German soldier returns to the Missouri Bootheel where he picked cotton as a POW, digs up an old mirror — and dares to look at his reflection

Rena Rocford – LANDING A JOB IN THE PRIVATE SECTOR
When an Imperial assassin’s Keeper betrays the Empire, the assassin goes off-planet — to transition out of government work as fast as possible

Ann M. Noser – TRAPPED
A woman is trapped inside a body with Alzheimer’s disease

Matthew S. Cox – OUT OF SIGHT
Unwanted kids wake up in an escape pod after years in stasis, and an AI bracelet is their only chance to make sense of a wild uncharted planet

Katie Young – THE ONE YOU FEED
A wolf hunter offers his services to a professional steer roper, hoping the cowboy will be his champion at the right time

Richard Roberts – HEART OF THE HARVESTER
A boy’s father sends him to a dangerous city populated with machines in order to bring back the heart of a harvester — but will the boy pass his test and become a man?