Sunday was a “mop-up” day for us, getting the few remaining trinkets we would be able to fit into our suitcases for the flight home, and grabbing a photo with the one and only Gary Fisher.

Yes, that Gary Fisher: beloved companion of the late Carrie Fisher. Why get a picture with a dog, you might ask? Well, he’s become a celebrity in his own right, and the proceeds of his photos and “Pawtographs” go to charity, so if you have a heart, and are a Star Wars fan, you get a photo with Gary Fisher. 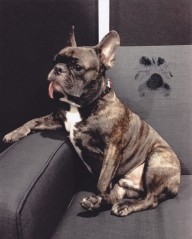 Now, I know a lot of folks were very interested in the Scott Bakula panel, so let’s start with that. 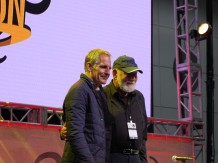 This was a very good 20-25 minute panel with Scott and TV maestro Donald P. Bellisario reminiscing about the groundbreaking science-fiction series, Quantum Leap.

The important things to take away from this panel, though, are that Scott and Dean Stockwell were the ones who drove the social aspects of the show, whereas Donald stressed repeatedly that they first make a good, entertaining show, and that if those kinds of social issues the series became so wonderful at addressing crept in, then so be it.

But make no mistake, Bellisario was adamant about entertaining his audience, first.

Also, when asked about the current trend of reboots and comebacks, Donald admitted he had just finished a draft of a Quantum Leap feature. I wouldn’t get too excited, though. It’s Hollywood, after all.

But you never know, right?

Anyway, here’s a short (2 minute-ish) clip from the panel. I apologize for the audio and framing issues. As I reported in my day 2 coverage, good spots for this kind of stuff were basically non-existent.

Having missed most of the Women Who Kick Ass panel with Katee Sackhoff due to other issues, I find my overall enjoyment of the event was average or slightly below, in relation to other events I’ve attended/covered.

So, yeah. Stan Lee’s LA Comic Con was an okay time, from that standpoint they had some good guests and great panels, but organizationally, they are definitely going downhill in the five years I’ve been attending.

I hope–fervently–they get things tightened back up, because as I have said before, it has been one of the funnest events I cover throughout the year. I don’t want to think I’ll consider writing this one off my list in the future, but travel and whatnot isn’t cheap (especially when you’re not being paid to do it).

Have a happy holiday season, everyone.