This past Saturday, I did something I had long talked about, but had never actually done: I attended a Penn State University Nittany Lion football game.

I have documented my youth, growing up in Pennsylvania, just 9 miles (as the crow flies) from Beaver Stadium in State College, but I never had the opportunity as a kid to attend a game. After moving to Texas, well, that possibility got even more remote. After retiring from the Air Force and staying in Utah, that idea was basically a pipe dream.

But this year, with Penn State projected (for over a month) to play the Cotton Bowl game in Dallas, I was ready to fly down and enjoy my first ever college game with my brother, who was going to drive four hours and make a weekend of it.

Imagine my surprise when my beloved Nittany Lions were instead slated to play in the Fiesta Bowl in Phoenix, Arizona. I thought since my brother couldn’t come, that was that, until my wife, ever the voice of reason around here, reminded me that “Phoenix is closer than Dallas.”

Hotel: 1 of 2 nights free due to rewards.

Experiencing a Penn State pep rally for the first time ever?

This pre-game look of the best player in college football from row 2 behind the endzone?

Find me a better one. I’ll save you the trouble of looking: you can’t.

And then: we won. The game was a bit tighter at the end than I would have liked, but we won.

35-28. A couple scary moments, but also some unbelievable ones. So very different–so much faster–in person than on TV.

Bucket list item checked off, and I was able to share it with the two most important people in my life. Thanks to my wife for making me do it, and for putting up with it all in the first place. 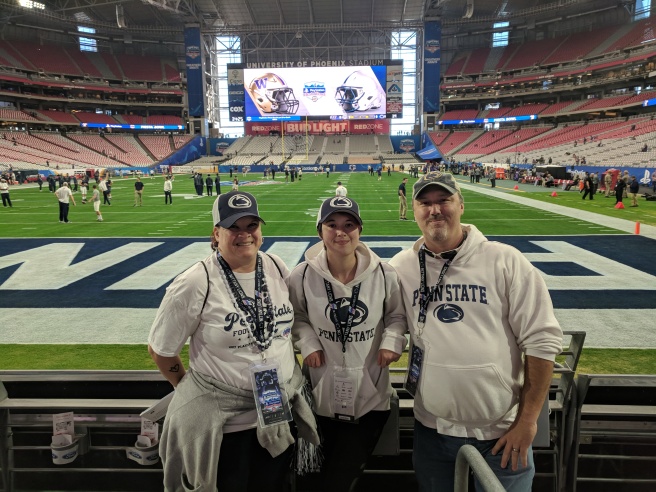